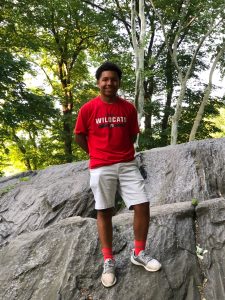 Many high school seniors find that the college application process is stressful at points. This is because certain SAT scores are desired, essays need to be in tip-top shape, and the applications need to have the ability to convince admission officers that the applicant is deserving of an acceptance letter. Prior to the release of admission decisions, most schools appear to be exclusive to their applicants. Davidson was a place that treated me as if I was valuable, even before I was accepted into the college.

My name is Brandon Harris, and I’m from Annapolis, Maryland. I stayed at Davidson for three days in March, before award letters were released. I found that current students weren’t treated as if they were superior to myself or other visiting applicants. In each class I visited, I was greeted by professors who wanted to know about what I was interested in and classmates who wanted to excitedly inform me on what was being taught.

I even ran into President Carol Quillen twice while on campus. She was enthused to have a conversation with me about where I’m from, what my goals are, and what my hobbies are. President Quillen also took the time to persuade me to come to Davidson. First of all, how many college students can say that they see their school president regularly on campus? Second of all, how many college applicants can say that they had the opportunity to have a one-on-one conversation with a college president? Lastly, how many college applicants are personally persuaded by a college president to come to their school? 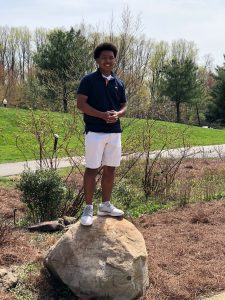 The fact that no signs of superiority or inferiority were seen on campus caused me to know that Davidson was the place where I wanted to be. At Davidson, I’m a curious learner, and the goal of the surrounding people is to offer me the opportunity to expand my knowledge.

For most of my classmates, it will be different moving away from family. I will be leaving behind my parents, my twin brother, and my nine-month-old puppy. Although the separation will initially be tough, my family is also convinced that Davidson is the best place for me to strive to become a stronger leader in society.

At Davidson, I am most looking forward to being surrounded by people who enjoy pushing each other to be better at what is expected of us. I’m also excited to cheer on the varsity teams in addition to intramural teams in our competitions. All in all, I’m excited to be immersed in a positive environment where success is achieved.

Brandon Harris '22 is from Annapolis, Maryland. He is a Belk Scholar interested in a pre-med track at Davidson.